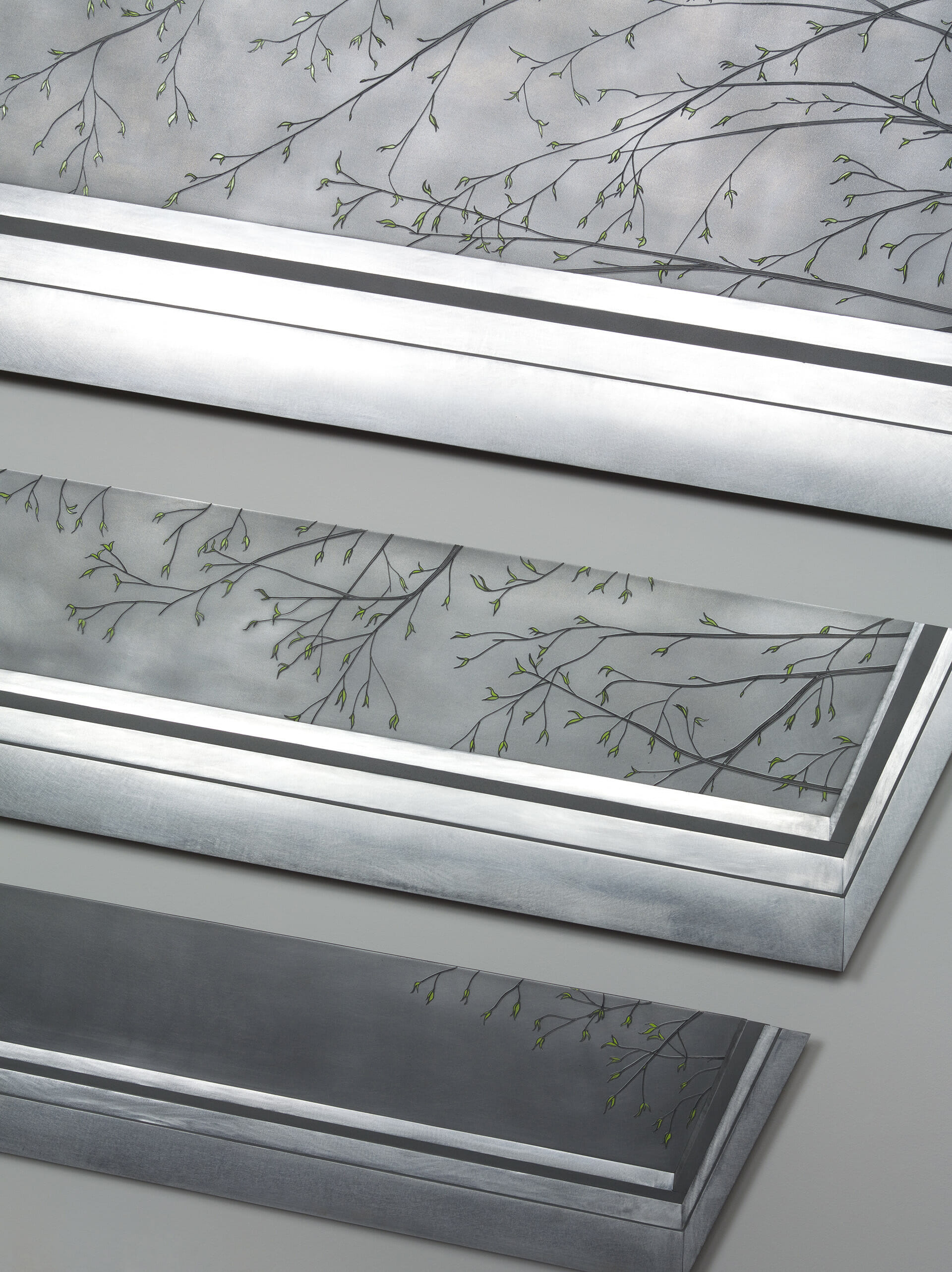 “The question of impersonality and individuality, and the dichotomy of alienated space and the space of memory, prompted completely new themes for Marcell Németh’s more recent works. In 2013 he created a curious projection of the vaulting in Somorja’s Protestant church (Šamorín, Slovakia), while one of the latest series of steel reliefs, which are arranged in installations, offers what seems to be a revelation of his own feelings with a view of a tree in bud seen through the window of his studio (External Space I–III, 2015). Nature is set in a structure here, with only as much visible as is permitted by the window frame; Németh rules out the possibility of direct contact with nature (showing it from inside a building), but discloses his own personal viewpoint. When this group of works examines the relationship of built space and nature, the emphasis falls elsewhere than in the earlier, industrial sceneries. Shrubs and trees, set off by the paint applied, appear in Németh’s reliefs not only as the somewhat worn out topoi of hope and new beginnings, but also as the attributes of uncontrolled, random, freely growing nature—like so many tokens of freedom. The motif of the plant as an individual organism has been absent from Marcell Németh’s calculated, carefully engineered world. In 2015–2016, the young artist turned away from the former, coolly phrased suburban themes, and pursued his sculptural experiments in a far more personal, organic direction. While the vegetal elements of the External Space series practically humanized the rigid geometry of the architecture, the three metal reliefs Németh made in 2016 have a far more enigmatic meaning. The Untitled series is in effect a sculptural and technical experiment, allowing the artist to study how the steel plate reacts when grooves are engraved on it at varying density. The procedure makes the sheet three-dimensional, and the undulating dynamic of the engraved lines is pregnant with exciting associations: the grooves in these completely abstract works are as reminiscent of magnetic lines of force, as they may suggest a closeup of high voltage power lines running in a strict order.

While developing professional techniques, sculptor Marcell Németh has essentially devoted the past ten years to the study of the function, meaning, and relationship of urban space, and its subset, private space. The output of his first decade bears witness to an artist who is always ready to experiment and is keen to push the boundaries of the genre, while having deeply organic roots in terms of form. And though surprises may abound in what follows, Marcell Németh seems resolute in pursuing the course he has set for himself.”